Warning: There are some unavoidable spoilers ahead in this review of episode 2 of Telltale Games’ Game of Thrones series. 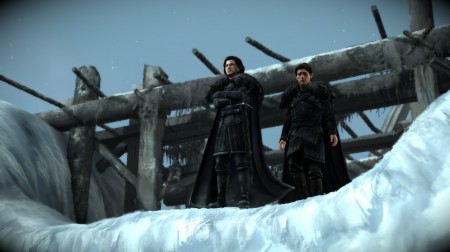 At the beginning of the episode, things in Telltale’s Game of Thrones series started to slowly heat up, but towards the end I felt like I was losing control of the situation at hand. As House Forrester readies for the coming funeral of Ethan here in episode 2 (subtitled ‘The Lost Lords’), Malcolm makes his way across the Narrow Sea in search of Asher.

The episode begins with Asher and his sellsword partner in crime, Beshka, in an abandoned tavern. At first all seems normal… well, as normal as it can be when talking about two mercenaries in Essos (Game of Thrones’ easternmost continent). After sharing a drink with Beshka, you find come to find an ex-slave trader, naked and bound behind the bar cabinet. Soon, an apparent enemy merc by the name of Tazal bursts through the door with the Lost Legion (no, not that Lost Legion), and kills the prisoner. After a brief, yet enthralling fight scene, Asher narrowly escapes death because of the well timed appearance of Malcolm.

I realize now, what my problem with this series was, that I couldn’t quite put my finger on before. It’s difficult to play multiple characters, and do what I would do, each time. Specifically because all of the choices, in one way or another, effect the others’ stories. For instance, when playing as Mira, you can swear fealty, and arrange to sell Ironwood to the Lannisters in exchange for their help in the oncoming war against the Boltons and Lord Whitehill (seriously, I hate that guy); but at the same time later in the game it becomes almost necessary to swear to have Rodrick promise to sell Ironwood to the Glenmores.

One of my biggest annoyances with the first episode still hasn’t changed either (nor did I expect it to, honestly). The graphics are terrible. There’s just no way around it. ‘Stylized’ is one thing, sloppy is another. I mean, The Walking Dead series was great, and I loved the style of The Wolf Among Us to death, but Game of Thrones’ look is such an eyesore. No horrible clipping issues this time around thankfully, but the ‘stylized’ shudder of the background is a consistent frustration of mine. You kind of have to see it to know what I’m talking about here.

Another issue I have is the occasional (albeit, noticeable), framerate drop. During my playthrough, there were more than ten (in a two hour period), and most of them weren’t mild. The on-screen action fell easily down to five fps or less, and this isn’t exactly a fast-action game. It’s also worth saying that there was some repeated audio dialogue as well on occasion.

In spite of these flaws, the game is still undeniably good, at least from a story perspective. With things heating up the way they are, I wouldn’t be surprised if this turned out to be one of the best Telltale Series’ to date, even with the presentation issues. So all of the above being said, I still can’t wait for episode three.

Five parts actual review, 2 parts sarcasm, 2 parts bad puns, and one part self loathing = one of my game reviews.
Previous There’s Havoc on the way to the PS4 and PC with Call of Duty: Advanced Warfare’s expansion
Next Marvel delivers Guardians of the Galaxy & X-Men: Black Vortex motion trailer