Is there such a thing as ‘too much Ultron’? We’re gonna find out. 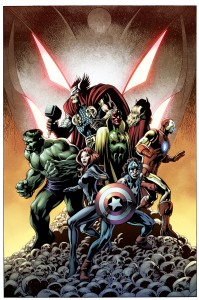 Not only is there a major motion picture, not only is there an original graphic novel, not only does he (it?) figure into Secret Wars, but Ultron is getting another starring turn in Avengers: Ultron Forever in 2015. The book will actually be a series of three releases and brings together Avengers from the past, present, and future in a tale from writer Al Ewing and artist Alan Davis.

Now – the present day Vision and Black Widow, James Rhodes, the Incredible Hulk, two generations of Thor and Danielle Cage, the Captain America of the future must join forces if we are to have any hope for tomorrow! Yet as they travel into the future to defeat Ultron and his servants, even they will not be prepared for what they find.

“If I had to pick one word to describe this story, ‘epic’ would be it,” says Avengers: Ultron Forever writer Al Ewing, speaking with Marvel.com. “It sort of builds and builds, until by the third issue you’re experiencing cosmic-scale war between…but that would be spoiling it.”

In the shadows of a nightmarish future, a new team of Avengers will rise to show the world that heroes can come from anywhere and anytime. It all happens when Ewing and David unite for AVENGERS: ULTRON FOREVER – coming to comic shops and digital devices this April!

For more on Avengers: Ultron Forever, please visit Marvel.com and check back later today for the full interview with writer Al Ewing.

Yep, that’s a lot of Ultron. Man did getting cast in the sequel to Avengers do a heck of a lot for this iffy Avengers villain. Maybe it’s just me, but Ultron has been a pretty boring character pretty much his entire ‘life’ in Marvel’s Universe. I remember being bored to tears when he would appear in Avengers book back in the 90s.

Now though, he’s on fire with movies and comic appearances galore. He must have a heck of an agent… the movie does look pretty awesome though. As for the 2015 special presentations, the Avengers, Uncanny Avengers, and New Avengers installments of Ultron Forever are all scheduled to hit shops this coming April.

Jason's been knee deep in videogames since he was but a lad. Cutting his teeth on the pixely glory that was the Atari 2600, he's been hack'n'slashing and shoot'em'uping ever since. Mainly an FPS and action guy, Jason enjoys the occasional well crafted title from every genre.
@jason_tas
Previous Mezco Toyz unveils the first two figures in their Mortal Kombat X toy line
Next The Exo-Zombies are coming to Advanced Warfare