Marvel’s big, universe altering, Autumnal event AXIS is getting the royal treatment from the publisher as Party Kits will be shipping out to retailers. 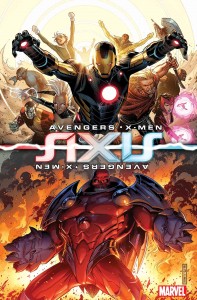 Launch days are always something special for fans of any sort, but comic book launches are usually fairly muted affairs that draw little in the way of hoopla. Till now anyway. Marvel Comics will be shipping Avengers & X-Men: AXIS Party Kits to retailers who opt in for the big day that the first issue of the mini-series hits stores.

“An event like Avengers & X-Men: AXIS deserves the red carpet treatment,” says David Gabriel, Marvel SVP, Sales & Marketing. “Escalating the conflict that began in Avengers vs. X-Men to new heights, we’re backing retailers with the biggest incentives you’ve ever seen with these launch parties. Whether it’s promotional materials, limited edition variant covers or special giveaway items, Marvel is committed to making sure fans are buzzing about this event. Each of our valued retail partners will have exactly what they need to entice their regular customers and new fans to check out the biggest event of the year and make AVENGERS & X-MEN: AXIS #1 their top seller for 2014.”

Stores who ‘opt in’ by the first of September (which is stunningly soon) will be on the receiving end of:

All that, and a special Deadpool Party Variant of the book, which is actually pretty awesome (see it in the gallery below). The variant cover, by Chip Zdarsky, has a decidedly ‘Deadpool’ edge and mirrors his… unique view on events and that ‘mirrored’ cover image.

As for the book itself and when all this is going down, look for the festivities to kick off on October 8th when Avengers & X-Men: AXIS hits stands.

Jason's been knee deep in videogames since he was but a lad. Cutting his teeth on the pixely glory that was the Atari 2600, he's been hack'n'slashing and shoot'em'uping ever since. Mainly an FPS and action guy, Jason enjoys the occasional well crafted title from every genre.
@jason_tas
Previous Amazon to buy Twitch for almost a billion
Next Tremble with fear at The Evil Within’s voice cast