The Winter Soldier goes to the final frontier in new series

Bucky is going where no spy has gone before. 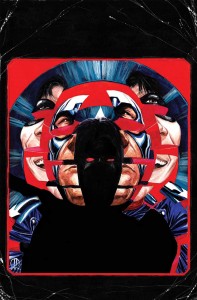 This October, go intergalactic as the super-soldier spy takes on a new mission in BUCKY BARNES: THE WINTER SOLDIER #1, the all-new ongoing series exploding into comic shops this October from rising comic stars Ales Kot and Marco Rudy! Following the shocking finale of Original Sin, what new mission has the Winter Soldier more driven than ever before?

Prepare to experience the greater Marvel Universe as the master assassin travels from the depths of Limbo to the far reaches of space on a new mission launching directly out of Original Sin! He’s toppled dictators and foiled terrorist plots. But what hope does one man have against aliens, monsters and Asgardians? Clearly they’ve never met Bucky Barnes…

“Ales teaches a master class on 21st-century spy stories in [his creator-owned series] Zero month after month, and he’s come up with a whole new spin on the genre for this new Winter Soldier series,” says Editor Wil Moss in an interview with The AV Club. “And Marco [Rudy] reinvents sequential art every time he draws a page, as anyone who read the recent New Avengers Annual knows, so he was a natural pick for a book like this where there are now limits, and where every corner of the Marvel U is going to be explored.”

A new mission begins, and the Winter Soldier brings his years of battle-hardened experiences to a larger stage than ever before! Be there this October for the pulse-pounding action and espionage when Kot & Rudy explore the man beneath the mask in BUCKY BARNES: THE WINTER SOLDIER #1!

Bucky seems like kind of a strange fit for an interstellar adventurer, but that just might work towards the new book’s advantage. I had kind of figured, along with plenty of others I assume, that the new Winter Soldier book would be a spy comic of some sort. While it definitely does seem like there’ll be some espionage action in there (since it plays to the character’s strengths), Marvel took the comic on a whole different direction.

Will The Winter Soldier work in a universe filled with Kree, Skrulls, and maybe even a few Brood? Well there’s no real reason why he couldn’t. At the end of the day, he’s still on a clandestine mission with plenty of bad guys to shoot at, so the theme is very much still there to keep fans happy, just with a science fiction twist to it.

Catch The Winter Soldier #1 on stands this October from Marvel Comics and the team of Ales Kot and Marco Rudy.

Jason's been knee deep in videogames since he was but a lad. Cutting his teeth on the pixely glory that was the Atari 2600, he's been hack'n'slashing and shoot'em'uping ever since. Mainly an FPS and action guy, Jason enjoys the occasional well crafted title from every genre.
@jason_tas
Previous OlliOlli rolls onto the PC, Mac, and Linux
Next SDCC 2014: The Witcher rides into San Diego in a big way