The nuclear-powered behemoth from the far east is back on the printed page, and ready to tear into your favorite city. 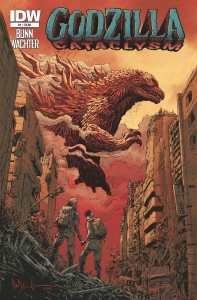 The 60th anniversary of Godzilla welcomes in a brand-new movie and a new comic mini-series entitled Godzilla: Cataclysm. The series takes the monster’s mythos to the far future, post /monster apocalypse’. It’s here that Godzilla has “abandoned humanity” and basically doesn’t want anything to do with people anymore as society has crumbled and the remains of mankind have branched off into tribal living.

“I’ve wanted to write a Godzilla story for as long as I can remember,” said Bunn, “before I even started Kindergarten, I drew a book titled ATTACK OF THE MONSTERS, which featured Godzilla, along with other monsters, terrorizing the world. The story started with Godzilla erupting from an iceberg and ended when the military dropped a massive sword on his head. I like to think that my storytelling sensibilities have matured since those days, but the desire to write a Godzilla story has remained with me.”

Jason's been knee deep in videogames since he was but a lad. Cutting his teeth on the pixely glory that was the Atari 2600, he's been hack'n'slashing and shoot'em'uping ever since. Mainly an FPS and action guy, Jason enjoys the occasional well crafted title from every genre.
@jason_tas
Previous ‘Master Chief’ Halo collection coming to Xbox One this year
Next Doom (PC) Retro Review