This Summer’s Original Sin will be spilling over into an accompanying five-part mini-series titled Original Sins. That’s with an ‘s’, as in plural. 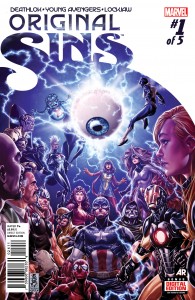 “No matter who you are, hero or villain or even merely a bystander, the Watcher saw everything that you did—every dark secret, every embarrassing indiscretion,” says Executive Editor Tom Brevoort. “It’s too late for the MU to erase its browser history—all of the sordid and scary and sadistic secrets are now being brought into the light of day, and the shockwaves will ripple across the Marvel Universe and its denizens in ORIGINAL SINS.”

Too big for just one series (and a whole mess of crossover issues) to contain, Original Sin is (I think anyway) the first mini-series event book to get an accompanying mini-series. It might seem like almost overkill at first, but Marvel is promising that this event is one for the ages, and with the characters involved and the source material behind the main narrative, that might not be bluffing.

Whereas Original Sin wil focus on the actual overriding story arc of the tale (that being the death of the Watcher) and the individual crossover comics will be tailored to their title characters, Original Sins will delve deeper into what’s being brought to the surface as to the pasts of a very interesting spread of characters. By that I mean that well be seeing stories in this anthology-like series laying bare the indiscretions of the Doctor Doom’s, Black Bolt’s, and Young Avengers of the world, right alongside the likes of the Deathlok’s and even Howard the Duck. Yes, you read that right.

This five-part mini is going to seriously shake up some commonly held beliefs for a lot of the heroes in the Marvel U. Don’t miss the first and second issues when they spin right out of Original Sin this June from the likes of  Nathan Edmondson, Ryan North, Stuart Moore, Mike Perkins, Ramon Villalobos, Rick Geary, Frank Tieri, Ty Templeton, and Raff Ienco- with plenty more names like Mark Bagley and Charles Soule on the way for issues three through five.

Jason's been knee deep in videogames since he was but a lad. Cutting his teeth on the pixely glory that was the Atari 2600, he's been hack'n'slashing and shoot'em'uping ever since. Mainly an FPS and action guy, Jason enjoys the occasional well crafted title from every genre.
@jason_tas
Previous Wolfenstein: The New Order’s alternate timeline looks pretty bleak in new trailer
Next Super Smash Bros Nintendo Direct