Garret returns to his thieving ways for the reincarnation of a classic.

I have never played a Thief game before, but I have found myself looking forward to the release of the reboot for the last six months or so. Maybe it’s because the thought of being a master criminal has always appealed to me.

There’s just something about the idea of sneaking into a building, with no one knowing you were ever there, and walking out about a thousand dollars richer that sounds awesome. Although, I guess it’s not too mysterious why…

Oh, and just a note here too, to let you know that during this review I won’t be referring to the classic Thief series at all or making any kind of comparisons to the originals. As I mentioned, I have never played the originals so all this is fresh and new to me. On with the review! 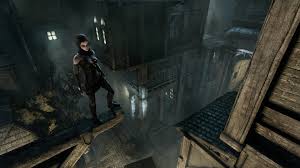 The game starts out with Garrett pilfering the bedroom of a sleeping drunk, after loading his pockets full of this pre-owned loot, he makes his way to the window to climb out. Soon following, Garrett meets up with a young lady by the name of Erin (who I assume was present in the earlier Thief games). They decide go to one one last job together, but (Spoiler Warning) things go haywire.

After sneaking onto the roof with Garrett, Erin falls through a glass window lands in the middle of some sort of summoning ritual. Garrett passes out, and wakes up in the back on a cart, this is where the game begins.

The gameplay is somewhat simple in Thief and is easy to grasp. Movements are smooth and I can only think of a few hiccups that the game gave me as far as the controls go. As for the difficulty, well, I heard a lot of complaints about the difficulty of this game; many people were saying that Thief is ridiculously easy. Of course, I played on the hardest setting and found myself being rather challenged (yet, having a great amount of fun).

It could be because I played on the hardest difficulty that I never found this game to be particularly easy, yet not hard enough to warrant ranting on either. Many people complained about the lack of exploration the game allowed you too, although I haven’t found this to be a problem. In fact, if there was something I could think of doing in a mission, it was usually there as an option.

Music doesn’t seem to be a high point in Thief’s resume though. It’s not terrible, but frankly- it isn’t very memorable. I will say though, that in times of great suspense, it does a very good job. If ever you leave the shadows and enter the viewpoint of a guard for instance, a loud satanic noise will go off, indicating that you have been spotted. This noise caused me to jump a great many times, and no I’m not even joking.

Something else I have been hearing a lot about the game is that it has a decent amount of bugs and glitches, which was honestly pretty worrying going in. But aside from one or two memorable glitches, (one of which being a guard moonwalking past me, who knows though, he could just have been in a good mood) I can’t really think of anything that would cause people to complain so harshly about it.

This concludes my review of Thief, it’s not bad at all; in fact, I would say it’s very good.

Granted, I never played the originals, but disliking a game because it’s not like it’s predecessors is not always a good idea (I’m talking to you, DMC haters!). Thief is a very good adventure, and should keep you entertained for about 15-16 hours, depending on what kind of gameplay style you have.

Please, please don’t discredit this game because of some bad reviews, it is very enjoyable and well worth your time.