The newest Spirit of Vengeance campaigns against drugs in crime-ridden East LA. 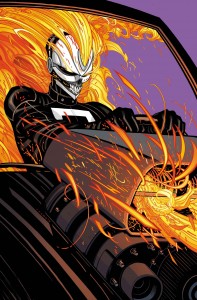 This April, the pedal hits the metal in ALL-NEW GHOST RIDER #2 – the explosive new series from creators Felipe Smith and Tradd Moore! Robbie Reyes has been imbued with awesome supernatural powers. But can this teenager control his new powers, or will it lead him down the path of destruction as he battles a new plague on the streets… the bizarre Pink Pills! What are they – and who is behind their creation? The streets of East LA are riddled with gangs, drugs, and violence. War is brewing in the criminal underworld. And it’ll take a new kind of hero to battle back the darkness. Don’t miss the next thrilling chapter in Robbie Reyes’ heroic journey in ALL-NEW GHOST RIDER #2!

I’m kind of excited about where this is going. Jonny Blaze had been the Rider for such a long time post-Danny Ketch that it’s great to see a new and stable character behind the flames again. Not that I have anything against the Blaze character, but after his original run as Ghosty, he’s honestly felt like more of a place-holder that anything else.

Maybe the fact that I liked the Ketch version of Ghost Rider so much is tinting my optimism a little towards Reyes (they’re both kind of similar in some ways), but I have a good feeling about this current incarnation. He’s also taking off after some stuff that could be considered ‘everyday’ with the Pink Pills too, which is kind of cool.

I actually don’t even mind the very different look and the four-wheeled vehicle either, and I thought I would. For the first time in a while, I’m looking forward to seeing where a Ghost Rider is headed, and as a big fan of the character, that’s a nice place to be.

All-New Ghost Rider #2 arrives on the racks from the team of Felipe Smith and Tradd Moore on April 2nd.

Jason's been knee deep in videogames since he was but a lad. Cutting his teeth on the pixely glory that was the Atari 2600, he's been hack'n'slashing and shoot'em'uping ever since. Mainly an FPS and action guy, Jason enjoys the occasional well crafted title from every genre.
@jason_tas
Previous Pennzoil Mario Kart 8 commercial
Next SXSW: Tales from the Borderlands gets a lot more detailed