Shin’en, the developer of games such as Jet Rocket, Nano Assault, and Fast Racing are working on yet another Wii U game. 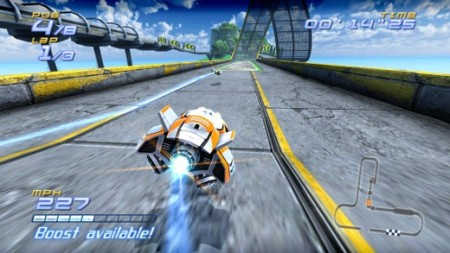 Shin’en Multimedia is known for close relationship with Nintendo. They’ve been making video games exclusively for their platforms as far back as the Gameboy Color. One possibility is Fast Racing Neo getting a Doki Doki Panic treatment. In other words, being changed into F-Zero. When previously questioned about a possible F-Zero game on Twitter, Shin’en did say they have something in the works. Whether this just means Fast Racing Neo as an alternative to F-Zero remains to be seen. You just never know with this company; they are a multifaceted developer. They’ve made platformers, racers, shoot’em ups, just about anything really.

Another thing to consider is Nintendo’s previous statements about having third parties develop some first party titles. What better partner to do this than one as close as Shin’en? The time frame for this announcement is largely up in the air, but they did say that it will occur in the next few days. Perhaps another Nintendo Direct will be planned just before Donkey Kong Country Tropical Freeze‘s release in Japan on February 12th.

Well, my name's Christopher Deleanides as you all know and I'm the Nintendo Editor here at BG. I've been playing video games since 1992, and I've been a Nintendo fan the entirety of those years. My love for video games as well as Nintendo hasn't changed, and probably never will. The only thing that comes close is politics, as I'm very deeply involved in both local and international issues.
Previous Introducing The Humble Sid Meier Bundle
Next Konami’s Castlevania: Lords of Shadows 2 gets a symphony