Empire of the Dead #2 (Comics) Preview 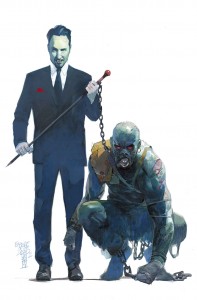 This February, Zombie Godfather George Romero’s next undead epic continues in EMPIRE OF THE DEAD #2 – written by George Romero and drawn by critically acclaimed artist Alex Maleev! Something is rotten in the big apple. And it’s not just the rotten flesh of the Zombies overrunning Manhattan! Deep in the pit of the bloody Circus Maximus – the undead battle for the amusement of the living. But not all here is as it seems. Amid the fury of the arena, vampires roam New York City, hiding in plain sight! What menacing secrets lie in the dark corners of the once bustling metropolis? And when the zombies and vampires prowl – where does that leave the humans? Find out in GEORGE ROMERO’S EMPIRE OF THE DEAD #2!

I’m continually surprised that this book is published by Marvel. Oh sure the Marvel Zombies thing was pretty gory and we got a ton of those (maybe just a tad too many), but that was a lot of tongue-in-cheek stuff and this is a straight-up zombie/vampire mashup book that’s not exactly short on horror- and it’s from George Romero, the father of modern zed flick, no less!

It just seems like something that Marvel Comics wouldn’t touch and yet here it is. And thank goodness for that by the way! The horror genre of comics used to be a major force in the industry and it’s all but receded into almost nothing since the early ’90s. Between some of the other publishers out there and Marvel kicking off Empire of the Dead, a very high-profile book I might add, it definitely seems to be lurching back into the spotlight.

Even as a comic fan who really does’t read much horror, that’s great to see. Variety and choice is such a great thing in the comics world and the more genres that are well-represented, the better as the audience for the art form in general can only grow. And that’s a good thing no matter how you bite, uh, slice it.

As for Empire of the Dead, the book has the undead running wild over what’s rapidly becoming a post-apocalyptic version of NYC. Sitting at the top and looking down at the rotting masses are the vampires. Creatures whose motivations still remain somewhat clouded in this horrific world that Romero has crafted. And where all this leaves the normal people, well, who knows?

Empire of the Dead #2, featuring the deadly zombie-fueled arena combat you see in the preview, hits stands from the team of George Romero and artist Alex Maleev on February 26th. And if you’re looking for variants; Arthur Suydam Greg Horn both have some wicked alt covers in the works that might interest you.

Jason's been knee deep in videogames since he was but a lad. Cutting his teeth on the pixely glory that was the Atari 2600, he's been hack'n'slashing and shoot'em'uping ever since. Mainly an FPS and action guy, Jason enjoys the occasional well crafted title from every genre.
@jason_tas
Previous Burial at Sea part 2 preview clip bubbles up
Next Blood of the Werewolf set to gnaw on consoles soon