Otto has screwed up royally and the Green Goblin is taking over NYC- and getting ready to destroy Spider-Man’s life piece by piece. 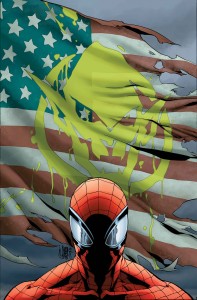 The end is here – and today, Marvel is proud to present your first look at SUPERIOR SPIDER-MAN #27.NOW – Part 1 of ‘Goblin Nation’! The Superior Spider-Man has failed. From the shadows, Goblin has taken complete control of New York’s underworld, right under his very nose. And it’s all Otto Octavius’ fault. The pieces are in play. The Goblin and his army are poised to dismantle his life piece by piece. But the Superior Spider-Man isn’t going down without a fight. Otto faces his greatest battle yet against Spider-Man’s greatest nemesis. But is he ready?

Win or lose, it’s all going to change. All leading up to April’s grand finale that will change everything you though you knew about Spider-Man! Don’t miss the first chapter of the biggest event in the entire Superior Spider-Man Saga when SUPERIOR SPIDER-MAN #27.NOW swings into comic shops this February!

Well, this is it folks; the last gasp for Otto and his ‘Superior’ version of Spider-Man. Writer Dan Slott’s grand storyline comes to a close in just a few months (this April) and he’s taking the Superior Spider-Man out with a very big bang.

The Goblin Nation arc has been in the works for a while now and this is the first issue of the Greenie’s big splash back into the Marvel U and Spidey’s world. This time is a little different than pretty much any point in the past too since he now has an army behind him, but if you know Norman Osborne, then you know you can expect just about anything out of him. Basically, if any  of Spidey’s baddies was going to raise an army- it’d be Norman.

See what happens when the last big story arc of Superior Spider-Man kicks off in issue #27 this February the 12th from Marvel Comics and the team of Dan Slott and By Giuseppe Camuncoli.

Jason's been knee deep in videogames since he was but a lad. Cutting his teeth on the pixely glory that was the Atari 2600, he's been hack'n'slashing and shoot'em'uping ever since. Mainly an FPS and action guy, Jason enjoys the occasional well crafted title from every genre.
@jason_tas
Previous Painkiller: Hell and Damnation (Xbox 360) Review
Next Microsoft buys the Gears of War franchise from Epic