Behold, The Last Days of Midgard have begun… 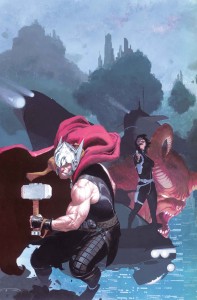 The Asgardian Thunder God has fought countless battles in defense of his adopted home of Earth. But there are no God Butchers or Dark Elves to fight this time. The planet itself is dying – a victim of abuse and depletion at the hands of Roxxon Energy Corporation – the world’s largest (and most nefarious) energy provider. How can he save the world he loves when there is no fight to be had? Now, Thor must team up with S.H.I.E.L.D. environmental agent Roz Solomon and square off against a multinational super-corporation and its ruthless CEO, Broxton Agger, a man the business world calls “The Minotaur”!

Meanwhile, millennia away, a future version of Thor squares off against the greatest threat in the history of the Marvel Universe – GALACTUS, the Devourer of Worlds! Winner take all! The prize? The remains of the planet Earth! Don’t miss the start of a blockbuster new story arc when “The Last Days of Midgard” kicks off in THOR: GOD OF THUNDER #19.NOW this February!

Some very cool themes in this one. Thor has never really been an ‘eco-concious’ hero either, but battling Roxxon Energy (which has a long history in the Marvel U) certainly does fit him. Of course, taking on a multinational company is just a wee bit different than slugging it out with the villain of the month.

As for the future timeline, that’s pretty cool as well since we get a one-on-one matchup that Marvel fans have definitely never seen before in Thor versus Galactus. Since Galactus is a cosmic force of nature in Marvel’s universe and Thor is a god, this part of the Last Days of Midgard story arc should be one of the ages.

Check it out when Thor: God of Thunder #19.NOW arrives on February 12th from the creative team-up of Jason Aaron and Esad Ribic.

Jason's been knee deep in videogames since he was but a lad. Cutting his teeth on the pixely glory that was the Atari 2600, he's been hack'n'slashing and shoot'em'uping ever since. Mainly an FPS and action guy, Jason enjoys the occasional well crafted title from every genre.
@jason_tas
Previous Underground Pixel is full steam ahead for 2014!
Next GOG.com charity drive takes in $1.9 million