Remember the charity ‘pick three’ promo on GOG.com from not all that long ago? Well it was pretty successful. 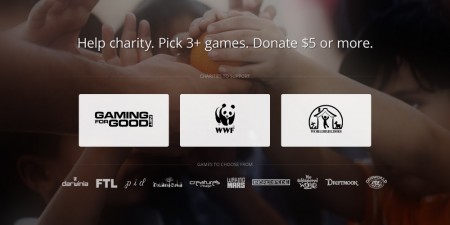 The promotion tasked gamers with picking up a trio of games (or more) for the benefit of one of three charities; WWF, World Builders or Gaming for Good. After you made your choices, a $5 (or more) sum would be transferred to your charitable institution of choice via Text To Give platforms. In all, it was a really nice promotion and a way for both GOG.com (who was celebrating 5 years in business at the time) and gamers both to give back a little.

A number of big name developers jumped on board for the event including Introversion, Subset Games, Tiger Style Games, Amanita Design, Instant Kingdom, Northway Games, Digital Game Factory, Might & Delight, Daedalic, and Oddworld. Each and every one of the groups listed were an integral part of the proceedings as they didn’t receive any royalties for games sold- all that cash went straight to the charity of the purchaser’s choosing. That’s just plain awesome, especially in the entertainment industry.

In total, sales form games like FTL and Waking Mars reached the sum of $1.9 million USD. That’s a pretty heady amount and a smashing success for GOG and the three charities. The gaming storefront is promising that we might  not have seen the last of a sale like this either as GOG is looking to the new year as one that will be filled with new games and “big announcements”. As for more giving back, GOG says that they won’t forget about that either as 2014 rolls on.

Honestly, we wouldn’t expect any less from the DRM-free online shoppe.

Jason's been knee deep in videogames since he was but a lad. Cutting his teeth on the pixely glory that was the Atari 2600, he's been hack'n'slashing and shoot'em'uping ever since. Mainly an FPS and action guy, Jason enjoys the occasional well crafted title from every genre.
@jason_tas
Previous Thor: God of Thunder #19.NOW (Comics) Preview
Next Superior Spidey swings into the Disney Store as a Marvel Select figure