Bucky Barnes heads into action for the Soviet Union at the height of the Cold War, as the origin story of the Iron Nail plays out. 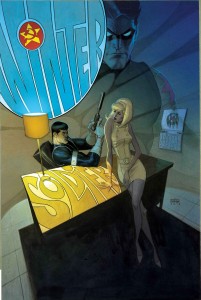 Bucky Barnes has been called many things – Avenger, Invader, and even Captain America. But to many, he’s known by only one name – The Winter Solider! A name that carries a bloody legacy reaching deep into the pages of history. And today Marvel is proud to present your first look at WINTER SOLDIER: THE BITTER MARCH #1 – a new limited series from blockbuster writer Rick Remender and fan-favorite artist Roland Boschi!

At the height of the Cold War, S.H.I.E.L.D. sends their top operative, agent Ran Shen, deep into enemy territory to retrieve two Nazi scientists that could be the key to winning the war. But they aren’t the only ones who want these high value scientists. The Soviet Union have unleashed their most ruthless agent – THE WINTER SOLDIER! His mission: acquire the scientists by any means necessary – or kill them before they fall into enemy hands!

“In the late 1960s, a S.H.I.E.L.D. mission gone wrong begat the creation of the Iron Nail, the foe whose schemes and strategies are bedeviling Captain America in the present in his own series,” says Marvel Executive Editor Tom Brevoort. “WINTER SOLDIER: THE BITTER MARCH tells the story of that fateful mission, and the events that set S.H.I.E.L.D. operative Ran Shen onto the path that would result in him becoming the dreaded Iron Nail.”

Don’t miss the intrigue, adventure, romance, and action in this high-octane, pulse pounding thriller that will have grave consequences for the life of modern day Captain America when WINTER SOLDIER: THE BITTER MARCH #1 hits comic shops this February!

There’s a lot to like about this one. Not only do we get to see the Winter Soldier in his prime and as a member of the Soviet Union, which is something that we really haven’t had a taste of as of yet, but we also get to delve into the swinging ’60s and have a look at the birth of the Iron Nail.

The 1960’s were a hugely turbulent time in world history and also one of the most culturally important decades in the 20th century so the era makes pretty great fodder for a tale like this. And with the Iron Nail’s origin being set in the book, it’ll have more than a little impact on readers enjoying the current run of Captain America where the Nail looms large. It’s also just kind of cool that we’re getting another book featuring Bucky, who really doesn’t get all that much play in the Marvel U considering that he’s going to be one of the stars of the upcoming Captain America: The Winter Soldier feature film.

That film arrives in theaters on April 4th, but you can read up on your Buck when the Winter Soldier: The Bitter March #1 arrives on the shelves on February 12th from Marvel and the team of Rick Remender and Roland Boschi.

Jason's been knee deep in videogames since he was but a lad. Cutting his teeth on the pixely glory that was the Atari 2600, he's been hack'n'slashing and shoot'em'uping ever since. Mainly an FPS and action guy, Jason enjoys the occasional well crafted title from every genre.
@jason_tas
Previous Steam gets divine with Divinity: Original Sin on Early Access
Next Kirby Triple Deluxe sells well in Japan