Home / News / The original Wasteland returns to Steam and GOG

The original Wasteland returns to Steam and GOG

Play the grandaddy of post-apoc RPG’s before the (LONG AWAITED) Kickstarted sequel hits. 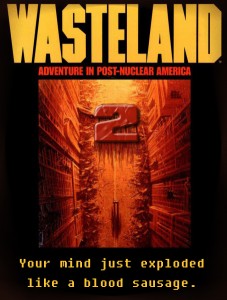 Welcome to The Wasteland. The year is 2087, eighty-nine years after an all-out nuclear war transformed the Earth into a hellish landscape where survival is a daily struggle against thirst, hunger, radiation, raiders and mutants. The player takes control of a band of Rangers, sent out to investigate a series of disturbances in The Wasteland, only to soon uncover a vast threat to all that remains of mankind.

Never get enough of that…

Developer inXile has brought the original, classic, all-time favorite PC RPG back from its nuclear-irradiated grave and onto modern PC’s. If you’d been paying attention to the Kickstarter campaign, then you know it was a raging success and Wasteland 2 is well on its way.

Wasteland (the original) plays out in a turn-based fashion and is gloriously old school in it’s design, though it has received some minor upgrades for this re-release. The score has been expanded with the help of Wasteland 2 composer Mark Morgan and you’ll find a bunch of other upgrades like ” uprezzed portraits, paragraph voice-over and a choice of playing the game upscaled and smoothed or in the original resolution”.

“Fans have been contacting me asking for the Wasteland 1’s return for many years now,” says Brian Fargo, inXile CEO. “It is great to get this title out there again, not just for existing fans to relive the experience, but also for a new crowd of people who did not get the chance to play it the first time around.”

So far, rereleasing the game has proven to be a hit as Wasteland 1 – The Original Classic has already been downloaded over 33,000 times and it’s been available (only for KIckstarter backers of W2) for less than a week. It’s also the second most accoladed title on GOG.com, which is pretty big time considering the amount of all-time classics that the site boasts.

If you’re looking to see what all the fuss is about and add Wasteland to your library, it’s available on both the aforementioned GOG.com and Steam right now for $5.99 USD.

Jason's been knee deep in videogames since he was but a lad. Cutting his teeth on the pixely glory that was the Atari 2600, he's been hack'n'slashing and shoot'em'uping ever since. Mainly an FPS and action guy, Jason enjoys the occasional well crafted title from every genre.
@jason_tas
Previous Need for Speed Rivals launch trailer revs up
Next Eternal Warrior #3 (Comics) Preview