Otto’s one-and-only is out to smash him for killing… himself? 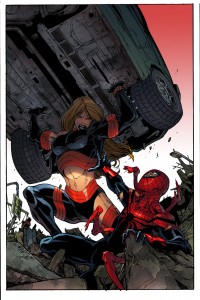 Otto Octavius has battled the likes of the Kingpin, the Hobgoblin, and the Vulture, but this November he faces his greatest threat yet in Superior Spider-Man #21 – the next installment in the biggest, boldest superhero comic of the year! From the blockbuster creative team of Dan Slott and Giuseppe Camuncoli – Stunner is back in town, and she’s out to avenge the death of the only man she’s ever loved, Doc Ock! Now she’s on a mission to obliterate the man who killed him – the Superior Spider-Man! Can Otto defend himself from Stunner’s onslaught without revealing his dark secret? What does this mean for the tangled web of Otto’s love life? Don’t miss the stunning Superior Spider-Man #21 this November for the answer!

Superior has to be one of the weirdest books out on the racks right now. Personally, I still can’t wrap my head around the fact that Doc Ock is still Spider-Man. It just doesn’t sit right- even though I think it’s safe to say that we all know it won’t last forever.

That said though, Dan Slott’s scripts and Camuncoli’s artwork are consistently terrific and make Superior Spider-Man an interesting book, month in and month out. I’d like to see both stick around for the foreseeable future, especially Camuncoli, as his style is really great and exactly what I want to see out of a Spidey book. Just uh- maybe get Pete back in the red and blue sooner than later.

Jason's been knee deep in videogames since he was but a lad. Cutting his teeth on the pixely glory that was the Atari 2600, he's been hack'n'slashing and shoot'em'uping ever since. Mainly an FPS and action guy, Jason enjoys the occasional well crafted title from every genre.
@jason_tas
Previous Aliens taking another bite out of gaming
Next LEGO Marvel Superheroes launches this week