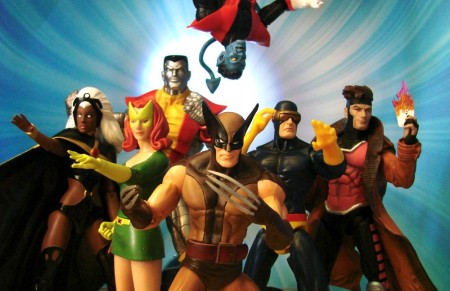 It’s actually pretty hard to figure (no pun intended) that the Marvel Select toy line has been around for over a decade. The line, which offers collector-quality Marvel Comics heroes and villains, is actually 11 years old this year. To celebrate passing the decade mark, DST has one awesome contest lined up for fans.

First, here’s what you can win across the three ‘winners’ tiers:

The grand prize will include:

– an unpainted all-black Venom prototype (with all parts)

The runner-up will receive:

The second runner-up will win:

– a pre-production Unleashed Hulk in test packaging (in this case, Deadpool packaging)

– an unpainted brown Amazing Spider-Man prototype (with wall base)

Excited? Good, because all getting in the running to win one of those prize packs takes is to make like Peter Parker and snap some pics. Just grab your camera (or phone) and take some shots of your favorite Marvel Select action figures posed in an interesting setting and with some cool lighting and away you go.

Here’s the official rules for entry, deadline info and other assorted good stuff:

The photos will be judged on a mix of pose, lighting, composition, complexity and innovation. Any Marvel Select figure, base or accessory made in the past 11 years can be used for the contest, and the photo can involve as few or as many figures and accessories as needed. No customization of figures is allowed, and no figures or accessories from other toy lines will be allowed in the photo. Digital effects beyond color adjustment (saturation, hue, etc.) are not allowed; no word balloons, energy blasts or Photoshopped elements. Photos must be at least 576 by 720 pixels.

Entries should be sent to [email protected] by midnight EST on September 1. Include your name, mailing address and phone number. One entry will be allowed per person, and the photo cannot have been submitted to any past DST-sponsored photo contest, or been recognized in any non-DST photo contest. Photo must be shot and owned by the entrant. By submitting your photo, you give us permission to use the photo in print and digital advertising, on packaging, as well as in online promotions. Entry is open to photographers in all countries.

Got all that? Well, get to snapping! Those goodies aren’t going to win themselves you know.

Jason's been knee deep in videogames since he was but a lad. Cutting his teeth on the pixely glory that was the Atari 2600, he's been hack'n'slashing and shoot'em'uping ever since. Mainly an FPS and action guy, Jason enjoys the occasional well crafted title from every genre.
@jason_tas
Previous Saints Row IV basically has a lot of stuff going on
Next Summer of Arcade goes live on YouTube