Infinity, the six part blockbuster comic event of the summer, brought to you by the star studded creative team of Jonathan Hickman, Jim Cheung, Jerome Opena & Dustin Weaver, takes fans to every corner of the Marvel Universe, and beyond! Earth has been marked as an “Avengers World”, protected by Iron Man, Captain America, Thor and more from the deadliest threats facing humanity. A powerful and destructive race is on a collision course with Earth and the only thing in their path is the Avengers! But even Earth’s Mightiest Heroes realize the one hope of defeating this dire threat is to unite every great hero across the cosmos…because only with a united Avengers Universe is there any chance of survival!

If you’re any kind of long standing Marvel fan and you’re not excited by the fact that Thanos is back and in a crossover event with the title of Infinity, then there might be something wrong with you. One of the greatest events in comics history, let alone Marvel history, The Infinity Gauntlet was an absolutely massive and landmark storyline that affected the Marvel U for years after it hit in 1991.

Just having one of the biggest baddies in comics back with Thanos resurgence is enough; add the Infinity name to it and it gets a whole lot bigger. As a big fan myself, I’m officially counting the days…

Jason's been knee deep in videogames since he was but a lad. Cutting his teeth on the pixely glory that was the Atari 2600, he's been hack'n'slashing and shoot'em'uping ever since. Mainly an FPS and action guy, Jason enjoys the occasional well crafted title from every genre.
@jason_tas
Previous Get political in Dragon Commander
Next SDCC: Person of Interest’s Machine invades hotel rooms at the Con 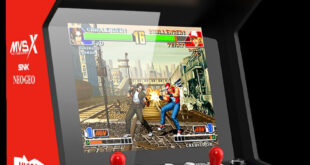