The Halo universe goes mobile with an old school styled, top down shooter. We’ve got screens aplenty and the official trailer for you.

There isn’t a ton of info about the story right now, but we do know that 343 Industries’ Halo: Spartan Assault takes place in the somewhat shadowy time between Halo 3 and 4. The war between the Covenant and Humanity has pretty much just ended and the Spartan program has been restarted.

Since the Chief is still in cryo at this point heading towards the Forerunner world seen in Halo 4, players will step into the armor of new series mainstay (and Spartan) Sarah Palmer. You’ll also be able to play as a second Spartan named Davis, and the UNSC flagship Infinity (also seen in H4) will be featured in the game as well.

As for where, when and on what you’ll be doing that playing; you can expect to see the game pop up on Windows 8 and Windows Phone 8 this July complete with all the requisite Achievements and medals you’d expect to see. In addition to that, Halo: Spartan Assault will also play nice with Halo 4 and you’ll be able to rack up XP, emblems and more for the console game while you play the mobile one.

Also pretty cool is that the previously announced Halo: Initiation comic book mini-series from Dark Horse Comics will tie in directly to Spartan Assault. So for players who want the whole story of the missing time between Halo’s 3 & 4 (personally I’d just like to know how the Covenant became a threat again), this July’s release of Halo: Spartan Assault might be your chance.

Jason's been knee deep in videogames since he was but a lad. Cutting his teeth on the pixely glory that was the Atari 2600, he's been hack'n'slashing and shoot'em'uping ever since. Mainly an FPS and action guy, Jason enjoys the occasional well crafted title from every genre.
@jason_tas
Previous Agni’s Philosophy spotted on Amazon UK and France
Next Skyrim Legendary Edition hits stores 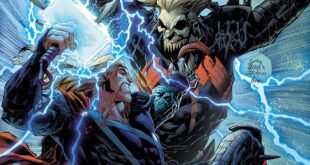