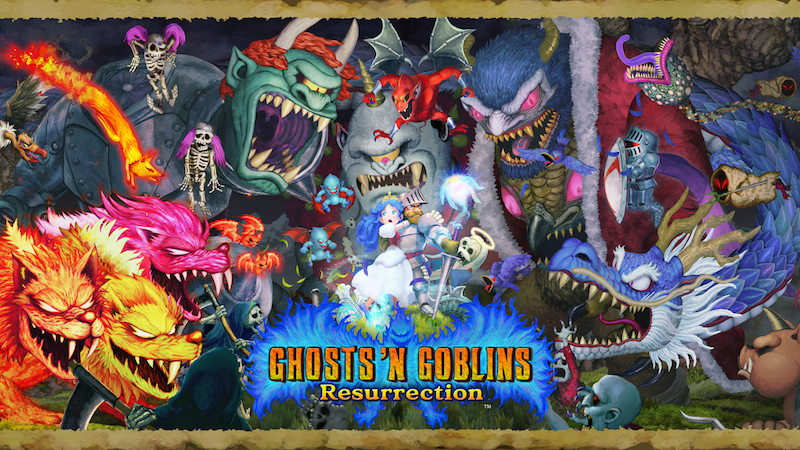 Return to the demon realm as the armored (or boxer’d) Arthur in Capcom’s rebirth of a classic series. Just keep in mind, this isn’t going to be easy.

Yep, it’s that time. Ghosts ‘n Goblins is back, and Capcom’s promising some “challenging action platforming gameplay” for its return. Have no fear though, as there are also multiple difficulty settings this time around.

As you can see too, this new quest is looking great.

To progress through Ghosts ‘n Goblins Resurrection, Arthur must chart his path through a series of stages in each zone of the Demon Realm. In his quest to rescue the princess and restore peace to the land, Arthur must face off against monstrous foes like Skeleton Murderer and Red Arremer, along with deadly bosses including Cyclops, Cerberus and Arthur’s longtime nemesis, the demon king Astaroth.

Notice some differences between this one and the classics? Capcom says that the new game is inspired by both Ghosts ‘n Goblins and its sequel (Ghouls ‘n Ghosts), but it’s also very much its own thing. And that means lots of fresh additions, past just sharp looks.

Maybe chiefly is that difficulty setting, but there’s also a multiplayer option. Co-op play offers up some helpers, in the form of ‘helper’ characters that get in on the action via player 2. Those include “Barry, who creates barriers for protection; Kerry, who carries Arthur through danger; and Archie, who creates bridges to cross”.

A total of 8 different weapons are available for Arthur to wield, and while they’re not upgradable, other stuff it. The Umbral Tree will allow the knight in question to “learn and upgrade a variety of magic spells and skills”. That’s another first for GnG.

Ready to dive back into Capcom’s vision of cartoony horror? Ghosts ‘n Goblins Resurrection is out now, exclusively on Nintendo Switch.

Jason's been knee deep in videogames since he was but a lad. Cutting his teeth on the pixely glory that was the Atari 2600, he's been hack'n'slashing and shoot'em'uping ever since. Mainly an FPS and action guy, Jason enjoys the occasional well crafted title from every genre.
@jason_tas
Previous Trailer: Blightbound makes its Final Charge to launch
Next Nintendo Download: Stand Brave Against Creatures From the Grave