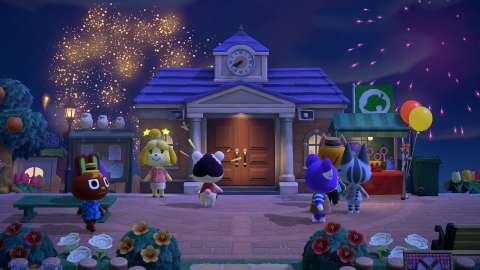 Home / News / Nintendo Download: Have a Blast With Fireworks and Dreams in Animal Crossing: New Horizons

Fireworks shows are coming to Animal Crossing on the Switch. It’s actually the highlight in what’s otherwise a pretty dull week of content.

When weekly fireworks shows coming to Animal Crossing: New Horizons is the highlight of the week, there isn’t much happening. And that’s very true here, as Nintendo’s Switch delivers what’s an overall lackluster week.

The actual highlight, majesty of fireworks notwithstanding, might actually be Skully. A game that stars an enchanted skull, Skully follows the adventures of the lead noggin as it rolls around an island environment and possesses creatures. Kind of a neat looking title.

Past that, there’s also the Samurai Showdown Collection, and a whole bunch of stuff you’ve probably never heard of.

Jason's been knee deep in videogames since he was but a lad. Cutting his teeth on the pixely glory that was the Atari 2600, he's been hack'n'slashing and shoot'em'uping ever since. Mainly an FPS and action guy, Jason enjoys the occasional well crafted title from every genre.
@jason_tas
Previous Seven more SNK titles join Twitch Prime’s free game selection
Next Sega joins EA’s Origin with Sonic Mania