Home / Comics / Daredevil suits up once again this May

Daredevil suits up once again this May

Writer Chip Zdarsky’s Daredevil run has been tumultuous one for the superhero. This May though, will see the return of the iconic hero.

Trouble in the Kitchen

Chip Zdarsky began his run on DAREDEVIL last year by having Matt Murdock hang up the suit and his super hero alter ego after tragedy struck. This May, Matt will suit up in his iconic costume once again when a lawless Hell’s Kitchen needs his help like never before in the new story arc, “Truth/Dare.”

Zdarsky’s refreshing takes on classic Daredevil elements and characters have made DAREDEVIL one of the most acclaimed comic books hitting stands today! And after a three-part story with guest artist Jorge Fornés, May’s DAREDEVIL #21 will reunite Zdarsky with comics superstar Marco Checchetto – making it sure to stand out as one of the most explosive and stylish books coming this spring. Don’t miss the new chapter of the book that Comicbook.com called “A magnificently complex super hero comic… one of the best super hero comics to be found” this May!

It’s always cool to see a major return, and it seems like that’s just what DD fans are in for here. That’s not to say that Zdarsky’s time on the Daredevil comic (up to now) has been uneventful, but seeing an iconic superhero suiting up once more is always a highlight. If you’re a fan of the man without fear, then issue #21 should be one to watch for.

It hits stands this May.

Jason's been knee deep in videogames since he was but a lad. Cutting his teeth on the pixely glory that was the Atari 2600, he's been hack'n'slashing and shoot'em'uping ever since. Mainly an FPS and action guy, Jason enjoys the occasional well crafted title from every genre.
@jason_tas
Previous BG’s Game of the Month for January 2020 is Warcraft III
Next Call of Duty: Modern Warfare’s season 2 starts now 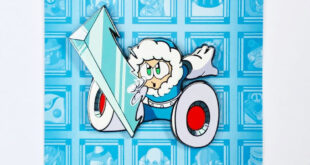 If you missed the news, Hasbro has a new HasLabs crowd-funder. It’s a gigantic 26″ …