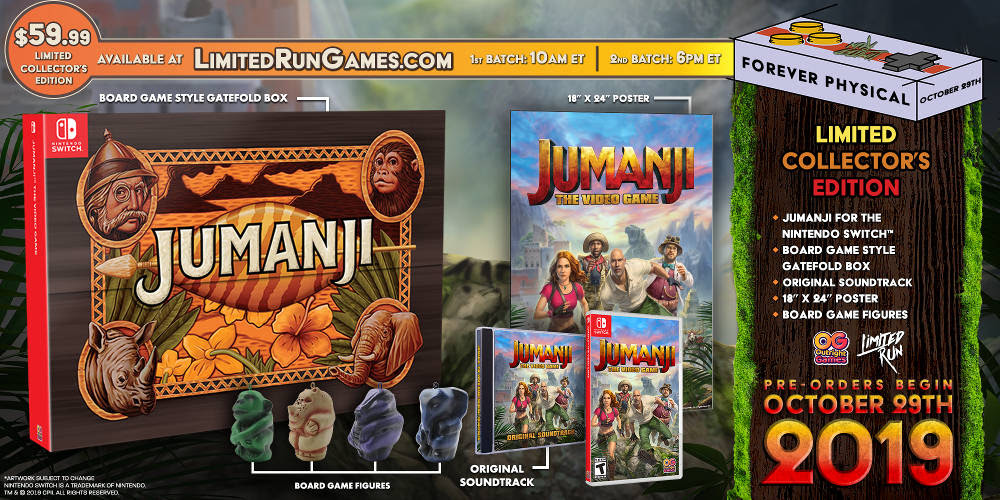 Jumanji fans will finally get to play an interactive version of the new film series soon, and they can add a Collector’s Edition to their shelf right now.

With a new series of movies set to see its first sequel on December 13th, Jumanji is riding high. Aside from the films, it’s also about to get a video game adaptation too. One aptly titled Jumanji: The Video Game.

Brought to you by leading worldwide family entertainment publisher Outright Games, Jumanji: The Video Game is a brand new 3D action adventure game that sees players take on the role of Jumanji’s greatest heroes as they fight their way through waves of deadly marauders and dangerous, exotic creatures in online, or split-screen modes.

While the game will be hitting for all major platforms, you won’t find the special Collector’s Edition at retail. That’ll instead come exclusively from Limited Run Games.

The online storefront specializes in exclusive physical copies of games. For this one, it has what looks to be a gem in store. The pack is loaded up with the game and a bunch of cool swag for fans to dig into. Maybe the only downer is that the PC version won’t get one. Nope, it’s digital only for PC gamers.

This limited run edition contains the full game, its original orchestral soundtrack, an exclusive character art poster and detailed replicas of the original Jumanji board game pieces. All of this comes packaged in an authentic board game style gatefold box for the most dedicated adventurers to add to their collection!

Ready for the next level? Jumanji: The Video Game lands on consoles on November 8th. Order a Collector’s Edition here.

Jason's been knee deep in videogames since he was but a lad. Cutting his teeth on the pixely glory that was the Atari 2600, he's been hack'n'slashing and shoot'em'uping ever since. Mainly an FPS and action guy, Jason enjoys the occasional well crafted title from every genre.
@jason_tas
Previous Star Wars Jedi: Fallen Order launch trailer released
Next WWE 2K20’s Bump in the Night Halloween content ready