Go back, way back, before the forthcoming Star Wars movie The Last Jedi kicks off. Marvel’s Star Wars: The Last Jedi – Storms of Crait fills in some gaps.

It is a time of civil war… and Luke Skywalker and Leia Organa are leading a rebellion. No, not the one you know, but one on the mineral rich world of Crait. Make no mistake though, this is a story that takes place during the time of the original trilogy. But it’s more wide-ranging than that. Marvel’s newest Star Wars book is a Last Jedi tie-in.

“We’re excited for the opportunity to tell this story,” said editor Jordan D. White, “Tying the new sequel series in more tightly with the original trilogy era, and helping make the Galaxy 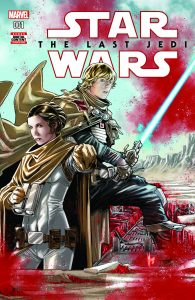 Far Away a little more fleshed out. The Bens are a great fit in for StarWars, as they showed in Join the Resistance, and Mike has did such great work on both covers and the Obi-Wan issues of the flagship StarWars title, that we couldn’t be happier to have him back doing art for us.”

Who are those “Bens” that White mentioned? That’d be Ben Acker and Ben Blacker, the writers on the new book. They’re joined by artist Mike Mayhew for a pretty meaty story, from the sound of it.

And again, it all focuses on the planet of Crait.

In Star Wars: The Last Jedi, it becomes a battleground between the Resistance and the First Order,  but that wasn’t the first time Crait became a place where heroes and villains clashed in their fight for the galaxy. Luke Skywalker and Leia Organa once took up arms on Crait and led the rebellion as they as they searched for a new home – and a new base for the Rebel Alliance. Tying in to the eagerly anticipated December film, STAR WARS: THE LAST JEDI – STORMS OF CRAIT promises to be a new and exciting adventure for all Star Wars fans – and a story that will change the galaxy as we know it.

Sound good Star Wars fans? Then watch for it when Star Wars: The Last Jedi – Storms of Crait lands on the racks on December the 27th.

Jason's been knee deep in videogames since he was but a lad. Cutting his teeth on the pixely glory that was the Atari 2600, he's been hack'n'slashing and shoot'em'uping ever since. Mainly an FPS and action guy, Jason enjoys the occasional well crafted title from every genre.
@jason_tas
Previous Nothing is forgotten in new Middle-earth: Shadow of War trailer
Next Call of Duty: WWII’s latest trailer lays out the game’s storyline, shows off stunning graphics