As a gamer, if you ever want to feel old, like me, just wait until one of the games you remember playing as a teenager gets a 20th anniversary re-release. 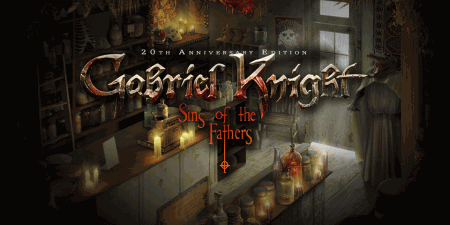 In this case it’s Gabriel Knights: The Sins of the Father.

The game was originally released in 1993 and published by Sierra On-line. Like many of the early 1990s games from Sierra, Gabriel Knight was a step-up in the graphics department, running at a glorious in 256-colored VGA. A departure from the earlier 16 color (EGA) palate of the late 1980s. Gone too, in Gabriel Knight was the old text commands that had been popular prior to the turn of the decade. Gabriel Knight featured a simplified, point-and-click style.

The original game came on eleven 3.5″ floppy discs (roughly 15 megabytes – which was considered to a pretty decent size at the time), but also saw a multimedia enchanced version on a single CD-ROM version that featured additional voice-acting by Tim Curry, Mark Hamill, Michael Dorn, and Leah Remini.

Gabriel Knight is back, and he’s looking better than ever. Rather than simply releasing the same game with some extras, the 20th Anniversay Edition contains a significantly updated look, complete with 3D rendered characters and environments.

The original writer and director, Jane Jensen, is back as well.

The game itself is gorgeous, and its style has remained faithful to the original, but takes more advantage of 20 years of technology. In fact, I’ve never played an adventure game that was capable of bogging down a system, but I tried it beefing up the visual settings on my Surface Pro 3, maxing everything out at the highest setting, and wasn’t able to run it very smoothly. I know that the SP3 is not a game-centric machine, and I rarely run games at more than the average visual settings, but wanted to give it a shot nonetheless. However when running the game at more normalized defaults it was just fine.

It’s hard to say what exactly has changed and what has stayed the same over the years, like if scenes or characters were added, expanded, or removed — I couldn’t tell you. While I played the game so many years ago, I barely remember much of it outside of familiar scenes that trigger those 256-color VGA memories from 20 years ago.

The version I played was considered a demo, and the final product isn’t being released for about 3 weeks, so there may be some tweaks to improve performance between now and then. 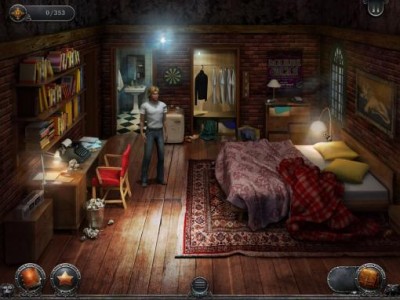 In addition to being available for PC and Mac, Gabriel Knight: Sins of the Father is expected to see an iPad and Android release, as well, with an estimated price tag of $20. As of this publication, you can pre-purchase Gabriel Knight for a 15% discount ($16.99) on through Steam.

Gabriel Knight: Sins of the Fathers 20th Anniversary Edition is scheduled for release on October 15.

Should you pick it up? That’s hard to say — I think it’s going to be more interesting to the gamers like me who played it in the past, and would like to take a trip down memory lane. I’m not sure how modern gamers will take to it, now that the idea of an adventure game is quite different than the days when Sierra ruled the roost.

I’d recommend waiting for more definitive impressions of the final product, unless you’re a diehard adventure gamer. It was good game then, how could a prettier coat of paint make a good adventure game worse? (That’s a rhetorical question – I’m sure jaded gamers can always speculate how to make a beloved game bad.) Perhaps you’ll come back and see if we’ve reviewed it to see our final take?

Troy is the Features Editor at Brutal Gamer. When he's not writing about or playing video games, he's enjoying life with his wife and children. He also loves coffee. And lots of it.
Previous Clockwork Empires (PC) Preview
Next EGX Hands-On: LittleBigPlanet 3

Happy… Dependence Day? While the name of the new Destroy all Humans! trailer doesn’t make …